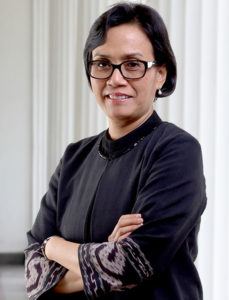 Mulyani stayed in the US for the next several years. She worked as a consultant with the US Agency for International Development on programs to strengthen Indonesia’s autonomy. For two years she was an executive director on the board of the International Monetary Fund, representing 12 economies in Southeast Asia. During this time she also served as a visiting professor who specialized in Indonesian economics for American colleges.

What with having her time management skills on lock, Mulyani racked up professional accolades and experience throughout the early 2000’s. In 2005 she was selected as the Finance Minister for Indonesia by then President Susilo Bambang Yudhoyono.

If you thought she was impressive before (and she was), take a seat. Once she got into office Mulyani really got the ball rolling.

In office, she immediately took on corrupt officials in the tax and customs department. She did this partially through creating incentive structures for civil servants in her department and paying higher salaries to tax officials so they would have less temptation to accept bribes.

A few more of her accomplishments:

-She was named Euromoney Finance Minister of the Year by Euromoney magazine in 2006.

-In 2007, Indonesia recorded 6.6% economic growth, its highest rate since the 1997 Asian financial crisis.

-During her tenure Indonesia’s foreign exchange reserves reached an all-time high of $50 billion.

-During the global economic recession in 2009, Indonesia’s economy actually grew by 4.5%.

She’s been outspoken about the need to close the global wage gap, and just how much we’re all harmed by keeping women from the workforce. Her time at the World Bank was partially spent researching women’s economic needs, and helping create a Gender Equality Strategy for women around the world.

The strategy focused on women’s health, women’s access to financial and job training, and eliminating social barriers women face surrounding money. (Like being able to open bank accounts, or securing investment capital for a business.) World Bank research conducted in 2013-2014 under her stewardship highlighted the social and cultural barriers in front of women. She paid particular attention to the rates of violence women face, and how that impacts educational and business opportunities for women.

In 2009 Mulyani faced accusations of corruption regarding a bank bailout. She maintains a position that the bailout was necessary due to the global recession. Critics say that money records from that time are sketchy, and it’s likely that money was laundered. She was never charged formally for anything.

It’s important to remember that when individual women achieve positions of power, women as a whole tend to thrive. Mulyani served as Managing Director for the World Bank for six years. In 2014, under her leadership, the World Bank loaned $22 million to female entrepreneurs in Ethiopia alone. The repayment rate? 99.6%.

Women in finance benefit other women. Dr. Sri Mulyani Indrawati is an impressive person, doing badass things. But she is by no means the exception to the rule. She was given the opportunities to pursue education and professional work in finance, and as such, she succeeded in her chosen field. With the same opportunities, other women can achieve just as much.

Previous Post: « How Side Hustles Changed My Financial Life
Next Post: Why Splitting Money 50/50 Doesn’t Work For Me And My Partner »

Feminist economics I Inclusive personal finance I Financial advocacy
We help you get better with money.
info at bravelygo.co
💲💰TOOLS + EVENTS 👇

✨FINANCIAL BLESSINGS FOR YOU✨ What would you

I have standards, please don't waste me or my mone

GOOD NEWS SHARE TIME Brag to me!! How are you kil