I’ve made no secret about that fact that I grew up in a low income household, and that I was a very low income earner for the first few years after college. I share this because I’ve found that very few people are sharing their stories of being low income.

It’s incredibly isolating to be broke all the time. You can’t do anything because you don’t have any money. Plus, when you look around it feels like everyone is earning $100,000, or vacationing in Hawaii. And you’re stuck in an extremely delicate cycle where one unplanned fee or charge can destabilize your monthly spending.

Now, I’m a pretty outspoken person. So it should surprise no one that a few weeks ago I got into an argument on Twitter about capitalism. I’m an anti-capitalist living in a capitalist world, baby. It’s my belief that capitalism is a broken system that is harming all of us. So of course, I shared this thought with Twitter Dot Com. And let me tell you, people had thoughts!

I started going back and forth with one man in particular, and I dropped the phrase ‘poverty olympics’ into the discussion. The term started generating interest on it’s own. So what are the poverty olympics and why are they terrible? Let me explain.

A few years ago I was introduced to the term ‘oppression olympics.’ I heard it in the context of a Jewish man telling a black man about how badly the Jews had suffered during WW2, so he (the black man) had no right to complain about how bad slavery was.

A similar thing happened to me on Twitter a few weeks ago. I was sharing some of my background in my tweets: single parent household that was on food stamps for years, parents had an expensive divorce, received a scholarship for college but also worked three jobs, graduated with debt.

And this other account was coming back at me saying things like “My parents didn’t even have enough money for the divorce” and “I grew up in even more low income than you.”

Here is a prime example of poverty olympics:

Person One: I grew up on food stamps.

Person Two: That’s nothing. I grew up on food stamps AND we were homeless.

Person Three: I wish I had your life. I grew up on food stamps, I was homeless, and I have a chronic illness.

Person two and three are discounting person one’s experiences because they don’t think it was ‘as bad’ as theirs. They’re trying to establish their voices and suffering as the worst, and thus the most legit, experience.

Let me be clear: there’s absolutely nothing wrong with sharing the circumstances of your background and the hardships you’ve overcome or might still be experiencing. In fact, I’d love to hear more stories from people with diverse financial backgrounds!

We need to create space in our world for those who have had to climb mountains in their lives, and we need to be respectful of people’s experiences that differ from our own.

What we don’t need to be doing is trying to one up each other with the hardships we’ve gone through.  I said just that when this man started playing poverty olympics with me. 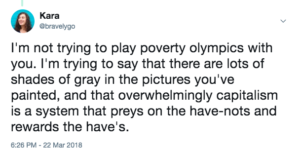 Pitting The Underdogs Against Each Other

Playing poverty olympics is a classic example of missing the forest for the trees. We focus so much on how terrible things were for us that we fail to see the bigger systems in place that are making things so hard in the first place.

Why are 40.6 million Americans living in poverty? Why do white women make roughly $.82 per a white dude’s dollar, and Latina’s make roughly $.58? Why are social welfare programs being slashed?

Instead of trying to erase each other’s struggles, why aren’t we asking why it’s so hard to succeed in our system?

When we play poverty olympics, or oppression olympics, we get so caught up in shouting our own stories we can’t hear other’s experiences. And this does nothing to serve anyone. All it does is create resentment and annoyance, and deepen the gap between people.

I’d rather see us turn the energy we’re using to compete with each other for scraps turned towards fixing the system. I want to see people vote, and volunteer, and spread education, and spread joy! I want to get to the top of the ladder, turn around and say ‘hey, you need a hand?‘

How to Quit The Poverty Olympics

You’ll probably find yourself in a situation like I did, especially if you’re a person on the internet. (The internet is obviously for arguing and nothing else.)

If you want to opt out of these particular games, here’s what you can do:

Listen to another person’s experience and try to empathize.

Educate yourself on the topic at hand.

Donate to a good cause. Put your money where your mouth is and help make someone’s life better. May I suggest Planned Parenthood, The Purple Purse Foundation, and RAINN.