Maggie Lena Walker was a woman who didn’t just accomplish things. She achieved things. She blew through barriers and laid the groundwork for Black people in the US to take control of their own finances.

Maggie was born to a Black slave woman, Elizabeth Draper, and a white Irish vagabond in 1864. Maggie grew up largely in poverty. Her adoptive father passed away while she was a child, and her mother worked as a laundress for white families to pay the bills. Her early experiences imprinted on her the financial differences between races, a lesson which would shape her adulthood.

After graduating college Maggie spent three years teaching. She married after her third year and was forced to resign, as her school didn’t allow married woman to teach. After she left teaching Maggie became deeply involved with the Independent Order of St. Luke, an organization dedicated to the social and financial advancement of Black people. 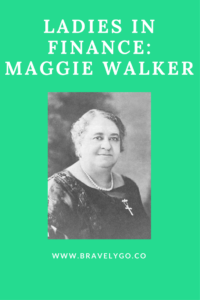 In 1899, almost twenty years after she first joined St. Luke’s, Maggie became the grand secretary of the order. Assuming control of the organization, she found that it was nearly bankrupt. She outlined and brought to life a financial plan to save the organization over the next several years.

This was a woman who got shit done. After becoming the grand secretary Maggie:

-found the St. Luke Herald, a newspaper that published news about St. Luke and it’s work

-opened the St. Luke Emporium, a department store that employed Black women and catered to the Black community

Maggie not only founded the St. Luke Penny Savings Bank, she also served as president until 1929. The bank was her idea through and through. At the 1901 St. Luke’s annual convention she called for a bank that served the Black community: “Let us have a bank that will take the nickels and turn them into dollars.”

A year later Maggie founded the bank. Her life had been spent in service of the Black community, and she knew that the key to equality lay in the financial sector. Black people were often turned down for loans by white banks, or charged higher interest rates due to the color of their skin. Some banks refused service to Black people.

In opening up a Black owned and operated bank, Maggie circumvented these racist practices. She kept Black money in Black communities, and gave her peers the ability to finance their own lives.

Maggie was the first female bank president in the United States. With her at the helm, the bank serviced more than 50,000 people. She even managed to keep the bank open during the Great Depression. She was the first Black person to be invited to join the Virginia Banker’s Association.

Maggie Walker was a woman in finance. She led her community as an entrepreneur and an educator. She is part of the legacy of women in finance.

What does "tax the rich" even MEAN? People throw

There is a DISCOURSE happening on Twitter I want y

WE DID IT. NO SPEND FEBRUARY IS OVER. How y'all f